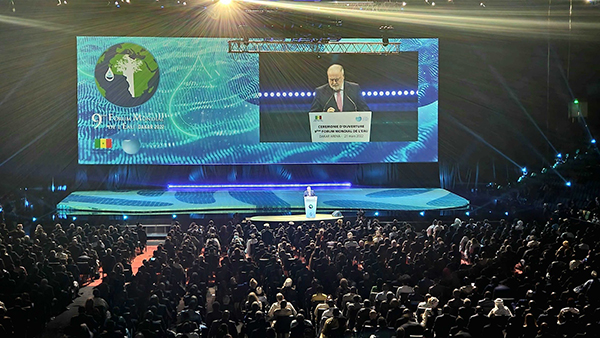 In his speech at the opening ceremony of the 9th World Water Forum, Loïc Fauchon stated four strong points, as guidelines for the Council in favor of water.

• Securing the resource
"Innovate and innovate again: pump, transfer, desalinate, recycle, and increase the amount of water available" while "disrupting our uses, our habits, and our behaviors" in order to consume better and less.

• The inclusion of the right to access to water in all Constitutions
"It is necessary to provide a guarantee of free minimum allocation and a daily water supply", but also "to make it an opposable right, by combining the legislative, executive and judicial powers".

• To rethink the financing of water
Mr. Fauchon joins the Senegalese President Macky Sall in his battle to cancel the water debt for the poorest states and communities. However, this measure should be associated with a requirement for immediate reinvestment of the same amount in the construction of water and sanitation infrastructure, he adds.
Mr. Fauchon also mentioned a "Blue Fund", derived from climate financing, "a true International Fund for Water Security".

The right to access to water: dates and figures
2010: the United Nations General Assembly officially recognized the human right to water and sanitation (Resolution 64/292).
2016: Slovenia became the first European state to make drinking water a constitutional right.
Between 2000 and 2010, about twenty countries in the world had written this right into their Constitution.