Towards a way to improve the situation

"There is a water crisis today. But the crisis is not about having too little water to satisfy our needs. It is a crisis of managing water so badly that billions of people - and the environment - suffer badly."    World Water Vision Report

With the current state of affairs, correcting measures still can be taken to avoid the crisis to be worsening. There is a increasing awareness that our freshwater resources are limited and need to be protected both in terms of quantity and quality. This water challenge affects not only the water community, but also decision-makers and every human being. "Water is everybody's business" was one the the key messages of the 2nd World Water Forum.

Whatever the use of freshwater (agriculture, industry, domestic use), huge saving of water and improving of water management is possible. Almost everywhere, water is wasted, and as long as people are not facing water scarcity, they believe access to water is an obvious and natural thing. With urbanization and changes in lifestyle, water consumption is bound to increase. However, changes in food habits, for example, may reduce the problem, knowing that growing 1kg of potatoes requires only 100 litres of water, whereas 1 kg of beef requires 13 000 litres.

Water should be recognized as a great priority. One of the main objectives of the World Water Council is to increase awareness of the water issue. Decision-makers at all levels must be implicated. One of the Millenium Development Goals is to halve, by 2015, the proportion of people without sustainable access to safe drinking water and sanitation. To that aim, several measures should be taken:

As far as transboundary conflicts are concerned, regional economic developement and cultural preservation can all be strengthened by states cooperating of water. Instead of a trend towards war, water management can be viewed as a trend towards cooperation and peace. Many initiatives are launched to avoid crises. Institutional commitments like in the Senegal River are created. In 2001, Unesco and Grenn Cross International have joined forces in response to the growing threat of conflicts linked to water. They launched the joint From Potential Conflicts to Co-Operation Potential programme to promote peace in the use of transboundary watercourses by addressing conflicts and fostering co-operation among states and stakeholders.

Although food security has been significantly increased in the past thirty years, water withdrawals for irrigation represent 66 % of the total withdrawals and up to 90 % in arid regions, the other 34 % being used by domestic households (10 %), industry (20 %), or evaporated from reservoirs (4 %). (Source: Shiklomanov, 1999)
As the per capita use increases due to changes in lifestyle and as population increases as well, the proportion of water for human use is increasing. This, coupled with spatial and temporal variations in water availability, means that the water to produce food for human consumption, industrial processes and all the other uses is becoming scarce.

It is all the more critical that increased water use by humans does not only reduce the amount of water available for industrial and agricultural development but has a profound effect on aquatic ecosystems and their dependent species. Environmental balances are disturbed and cannot play their regulating role anymore.

An increase in tensions

As the resource is becoming scarce, tensions among different users may intensify, both at the national and international level. Over 260 river basins are shared by two or more countries. In the absence of strong institutions and agreements, changes within a basin can lead to transboundary tensions. When major projects proceed without regional collaboration, they can become a point of conflicts, heightening regional instability. The Parana La Plata, the Aral Sea, the Jordan and the Danube may serve as examples. Due to the pressure on the Aral Sea, half of its superficy has disappeared, representing 2/3 of its volume. 36 000 km2 of marin grounds are now recovered by salt. 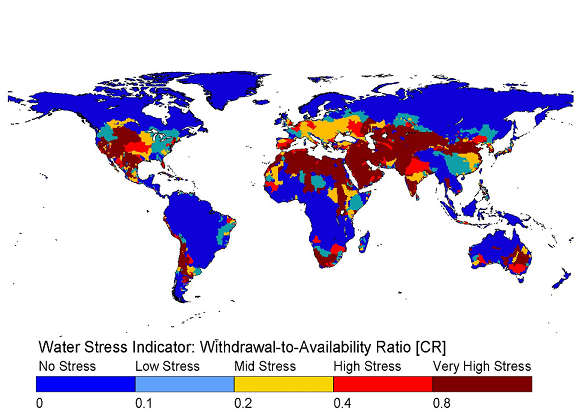 Water stress results from an imbalance between water use and water resources. The water stress indicator in this map measures the proportion of water withdrawal with respect to total renewable resources. It is a criticality ratio, which implies that water stress depends on the variability of resources. Water stress causes deterioration of fresh water resources in terms of quantity (aquifer over-exploitation, dry rivers, etc.) and quality (eutrophication, organic matter pollution, saline intrusion, etc.) The value of this criticality ratio that indicates high water stress is based on expert judgment and experience (Alcamo and others, 1999). It ranges between 20 % for basins with highly variable runoff and 60 % for temperate zone basins. In this map, we take an overall value of 40 % to indicate high water stress. We see that the situation is heterogeneous over the world.

The concept of Water Stress

Already there is more waste water generated and dispersed today than at any other time in the history of our planet: more than one out of six people lack access to safe drinking water, namely 1.1 billion people, and more than two out of six lack adequate sanitation, namely 2.6 billion people (Estimation for 2002, by the WHO/UNICEF JMP, 2004). 3900 children die every day from water borne diseases (WHO 2004). One must know that these figures represent only people with very poor conditions. In reality, these figures should be much higher.

While the world's population tripled in the 20th century, the use of renewable water resources has grown six-fold. Within the next fifty years, the world population will increase by another 40 to 50 %. This population growth - coupled with industrialization and urbanization - will result in an increasing demand for water and will have serious consequences on the environment.