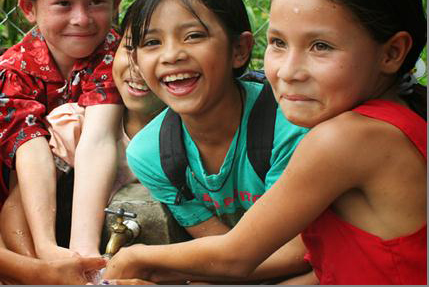 “Water is the common thread connecting all of the sustainable development goals. A stand-alone water goal is critical as part of the Post-2015 development agenda” President of the World Water Council, Benedito Braga, said in his opening speech at the Budapest Water Summit last October.
The World Water Council has just released its position paper in favor of a dedicated Sustainable Development Goal on water within the post-2015 framework and identifying water as a pre-requisite for all development.  The paper will serve to carry the voice of the international water community towards the UN Open Working Group on Sustainable Development Goals, which is set to meet until February 2014. “It is essential that we consolidate as much support as possible for a dedicated goal on water by next February in anticipation of the next steps that will be taken for establishing the Sustainable Development Goals,” says Karin Krchnak, World Water Council Bureau member and Chair of the Council’s special task force on SDGs.
The paper underlines above all water’s cross-cutting role in supporting development to eradicate poverty and highlights other issues such as the importance of sustaining the momentum generated by the Millennium Development Goals, and the need for a high-level multi-stakeholder platform where ideas can converge and be developed. In recent months, the World Water Council has equally supported the positive messages on the importance of water in the SDGs provided by, among others, UN Water, the Stockholm Statement of the 2013 World Water Week and the Budapest Water Summit (link to statement).
Download the WWC’s position paper on Water in the Post-2015 agenda
Support the effort on our social media platforms: follow us on Facebook and Twitter
Tags
WWC
WWC