Human Settlements: Framing Note for the High-Level Panel on Water 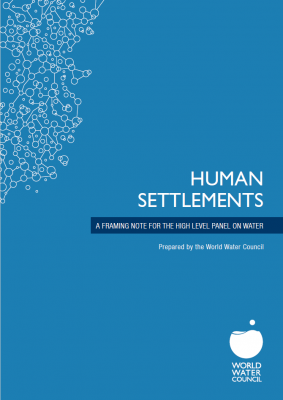 In 2016, at the High-Level Panel on Water’s (HLPW)request for contributions, the Council drafted two framing notes for consideration: one on water infrastructure and investment and the other on water and human settlements.

The HLPW was composed of 11 sitting Heads of State and Government and one Special Adviser, that was convened between 2016 and 2018 by the United Nations Secretary-General and President of the World Bank Group to provide leadership to pave the way to the successful implementation of SDG6.

This framing note principally reviews the current landscape of cities and informal settlements in view of population growth and rapid urbanization and their consequences on the environment. It presents the challenges that cities face in relation to water (including sanitation and resilience) and the achievement of the Sustainable Development Goals. The framing note also proposes which stakeholders to engage and which actions to take globally.

The HLPW’s mandate ended in March 2018 with the release of its outcome report ‘Making Every Drop Count’, which was promoted at the opening of the 8th World Water Forum in Brasilia.

If you wish to inquire about ordering condition for a publication or book, please feel free to contact our Communications Officer.