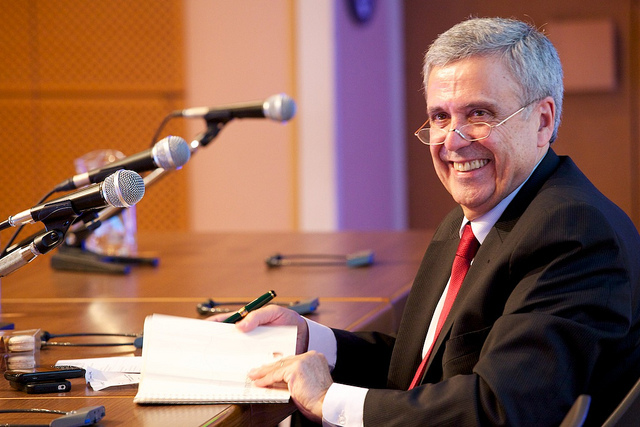 Brazilian Professor of Civil and Environmental Engineering, Benedito Braga, was elected President of the World Water Council on Monday 19 November during its 6th General Assembly. The 36 members of the Board of Governors unanimously chose him to shoulder this important responsibility. “Thank you for your confidence,” Mr. Braga said and promised to work closely with the elected Board and the members. “It is an important challenge you have given me. During this mandate we will give continuity to the work initiated by my predecessor Loïc Fauchon in the political area and we should reinvigorate the Council capacity to produce new water policies worldwide,” he continued before stating his motto for the coming three years: Continuity with change and innovation. For the coming mandate, the Council will continue to work in three strategic directions: water security for human essential needs, water security for economic development and water security for environmental sustainability. The necessity of these directions was confirmed during the Assembly for which 240 participants had gathered from all over the world. Rintaro Tamaki, Deputy Director-General of the OECD, Joan Clos, Director General of UN-Habitat and Katia Abreu, Senator and President of National Agriculture Confederation of Brazil, were some of the distinguished speakers who had travelled to meet the Council members and give their respective views on subjects such as food security in dry lands, urban water management and sustainable agriculture management.  “In a population dense country such as Brazil we are fully determined to increase our water efficiency. The World Water Council is an excellent forum to help us with this,” Senator Abreu said. This was echoed by Joan Clos who emphasised the need for urban design and planning in major cities. “In 25 years, 75% of the world will live in cities,” Mr. Clos said. “Un-Habitat therefore strongly supports the World Water Council in its work on urbanisation and Local Authorities.” Following the elections, the members engaged in a full day of discussions on various areas such as hydro-politics, the World Water Forums, the organisation of the Council, membership, communications and thematics. During the closing ceremony the participants provided valuable input into the strategic direction the Council is about to take. President Braga acknowledged their immense importance and ended the two-day-event with the words:  “In the coming years, the Council will only have more and more political influence. This is thanks to our members who provide the content. Together we will make real progress on securing water for the betterment of humankind.”

The World Water Council has announced it

First official meeting of the new Board in Marseille

The Council’s Board of Governors gathere