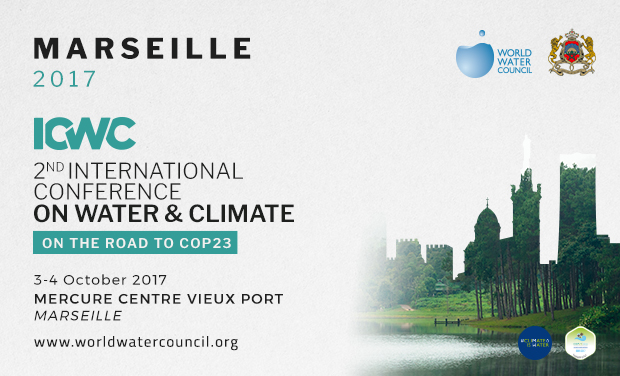 The World Water Council, in cooperation with the COP22 Presidency as represented by the State Secretariat for Water of the Kingdom of Morocco, organized the 2nd International Conference on Water and Climate: Fostering dialogue on the road to COP23 in Marseille on 3 and 4 October 2017. The event, endorsed by the COP23 Presidency and presided by World Water Council Honorary President Loïc Fauchon and H.E. Charafat Afilal, Secretary of State for Water and Environment of Morocco, brought high level participants, such as international experts and political leaders at the forefront of the debate on climate change and water, as well as several environmental ministers, including, Istiaque Ahmad, Secretary of the Ministry of Environment and Forests of Bangladesh and Sindra Sharma-Khushal, from the UNFCCC COP23 Presidency Team for Fiji. Climate negotiators and government representatives from Fiji, Sierra Leone, Algeria, Mauritania, Ghana, Burkina Faso, Bangladesh, Morocco, Germany, and El Salvador as well as many representatives from key sectors all took part in the event. The mission of the conference was to map the way forward and generate global awareness on critical water issues ahead of the COP23, which will take place in Bonn in November this year and the World Water Forum in Brasilia in March 2018.

The conference highlighted the importance of water as a central element to human development overall and at the heart of climate change impacts. “Water is an enabler and a connector, an essential common thread that connects the many aspects tackled by the Sustainable Development Goals.  I firmly believe that far from being a problem, water is a solution, a determining factor in making the world a better place,” explained Prof. Dogan Altinbilek, World Water Council Vice-President.

The 2nd International Conference on Water and Climate drew particular emphasis to SDG 11; Sustainable cities and communities and SDG 2; Zero hunger, as well as on the Water for Africa Initiative, launched at the previous edition of the conference.

“Without water we would be a barren lifeless planet. A fundamental truth about water and its connection to all of life is that its unwise management is increasingly becoming an obstacle to facing climate change. And addressing climate change is a pre-requisite for peace,” declared Sindra Sharma-Khushal, of the UNFCCC COP23 Presidency Team. As a result of climate change, fresh water is becoming a scarce resource. As a result of all the crises we face today as humans, our very survival depends on the urgency with which the global community confronts the adverse effects of this reality," said Istiaque Ahmad, Secretary of the Ministry of Environment and Forests for Bangladesh.