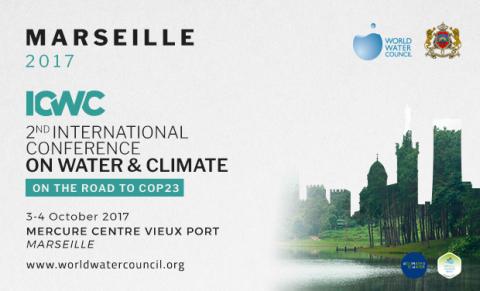 Marseille, France
Climate change impacts water resources first and foremost and water should be perceived as a connector offering solutions both to climate change adaptation and mitigation.  In recent years, the World Water Council has strived for recognition of the role of water within climate discussion.
Following the success of the first International Conference on Water and Climate "Water Security for Climate Justice" held in Rabat in July 2016, the World Water Council, with the support of the CoP22 Chair as represented by the State Secretariat for Water of the Kingdom of Morocco, and with the collaboration of other international partners, will organize the second edition of the event on 3-4 October in Marseille, France.
One of the main results of the first edition was the establishment of the first Global Climate Action Day for Water during CoP22 co-facilitated by the Council together with French and Moroccan representatives. This landmark event emphasized water as one of the eight priority areas for climate action. The conference serves as an interim event between CoPs to keep up the momentum for water within climate discussions at CoP23 and beyond.
As for the past edition, the principle objective of the meeting is to mobilize and encourage a range of political and institutional stakeholders to work together so that water remains an important element of climate discussions within the UNFCCC’s 23rd Conference of the Parties in November of 2017, strengthening the dialogue between the water and climate communities towards the implementation of the Paris Agreement and Sustainable Development Agenda 2030.
The program will offer special focuses on water for food, urban resilience, and water for Africa within the context of climate change.
For further information, please send an e-mail to: climateiswater@worldwatercouncil.org
Watch the event on our live streaming page Read more on this:
Email
wwc@worldwatercouncil.org
Organizer
World Water Council
WWC