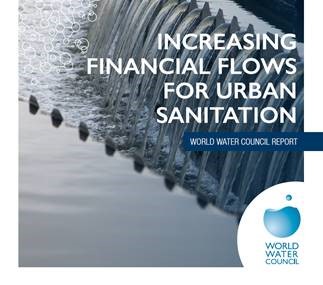 The World Water Council launched a report this week on ‘Increasing Financial Flows for Sanitation’ during the 8th World Water Forum in Brasilia, Brazil and also Policy Recommendations for Ministers and Local Authorities, encouraging decision makers to be bold and embrace change. The report, prepared over the course of a year assesses the current situation of urban sanitation in eight cities around the world and proposes necessary policy actions to meet the sanitation target of Sustainable Development Goal 6 (SDG6) by 2030, as well as the financial requirements needed to bring these actions to fruition. People lacking access to improved sanitation is 2.4 billion worldwide, and with increasing trends of urbanization, and extreme weather events due to climate variability, the time to act on urban sanitation is now.

Despite some progress on sanitation since the 2000 Millennium Development Goals, this sector remains severely underfunded and poorly prioritized by governments worldwide. This report analyses sanitation issues across three continents in both the developing and developed world, focusing on Nairobi, Dakar City, Durban and Bogotá, among others, in an effort to demonstrate the effects of underfinancing, poor management and urbanization on sanitation. The World Water Council hopes this report, along with a range of other publications and high-level discussions taking place at the 8th World Water Forum, will provide the necessary impetus to prompt action on this topic.

Jon Lane, Consultant of the task force which produced this report, said during the World Water Forum, “Governments and others will recognize the benefits that sanitation gives to society; we call them societal benefits and economic benefits. Improved sanitation improves people’s health, improves their working productivity, it safeguards the environment, and it cleans up the cities, which will generate more tourism and economic development.”

The key messages for all decision-makers in this newly published report are; to save money by implementing more cost-effective urban sanitation services; increase financial flows by using a range of existing and new financing instruments and mechanisms; and achieve the urban sanitation SDG by 2030 by being positive and resolute.

World Water Council President, Benedito Braga underlines the importance of immediate action in order to achieve the sanitation target of SDG6, stating, “Although concerted efforts have been made to improve access to the most basic forms of sanitation, one third of the world’s population still lacks it. Urban sanitation is costly and requires consistent and substantial finance and an increase in the flow of this finance, since it is often neglected in favour of other priorities.”

Founded by the World Water Council, the 8th World Water Forum is currently being held in the Brazilian capital, Brasilia, 18 - 23 March 2018, under the over-arching theme of “Sharing Water,” in light of water’s role in uniting communities and tearing down barriers. The World Water Council welcomes all to join the world’s biggest water-related event, bringing together heads of state, ministers, high-level decision makers, water experts and professionals, civil society, local authorities and academics. The World Water Forum places water firmly at the heart of global development. It represents a call to action to ensure water’s and our future.