Climate and water converge at CoP21 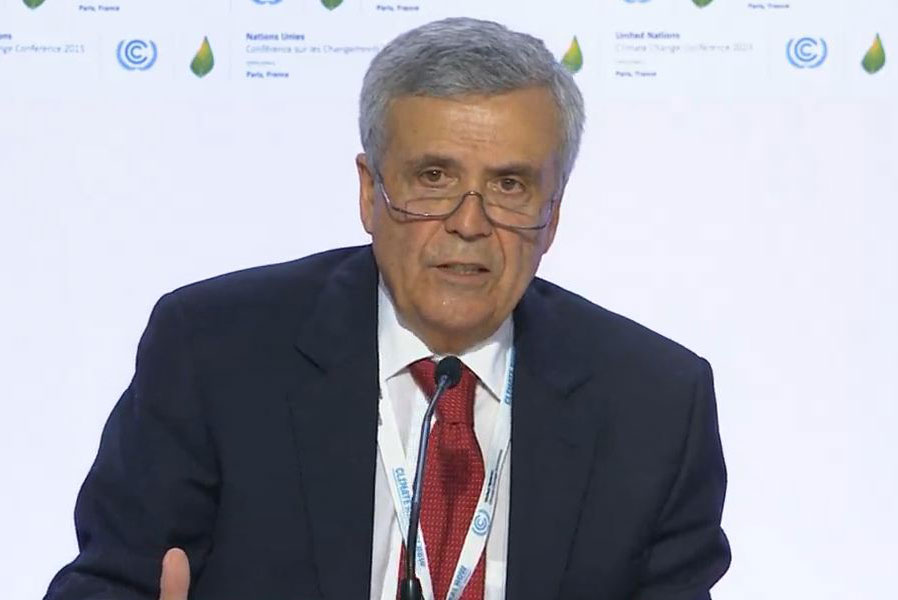 At the 21st Conference of the Parties on climate change (COP21), the World Water Council, together with over a dozen members of the international water community, came together through the #ClimateIsWater initiative, to elevate recognition for water and climate at the political level. In the blue zone, where the official CoP21 negotiations took place, water issues were explored during "Resilience Day", a part of the Lima Paris Action Agenda. Benedito Braga, President of The World Water Council, reminded government representatives that failing to address the relationship between water and climate puts our future in jeopardy. "All the energy producing systems depend on water. And we are taking it for granted that water is going to be there when it's necessary and at the price that you pay today... water needs to be truly considered in these discussions." President Braga also participated in a High level Panel on Water and Climate Change organized by the African Ministers' Council on Water (AMCOW) in the blue zone, linking the potential difficulties posed by climate change to delivery of the Sustainable Development Goals. In view of the GDP lost annually in Africa due to poor access to water and sanitation and to droughts and floods, President Braga concluded that "All these aspects of economic loss are directly related to poor infrastructure development...Investment is critical." In parallel, in the green zone (the civil society space) the #ClimateIsWater initiative organized an event coordinated by the Alliance for Global Water Adaptation (AGWA) on "Solutions for the future." Fraser MacLeod, Executive Director of the World Water Council, presented how water resources management contributes practical solutions based on emerging findings from the program on Increasing Resilience to Climate Variability and Change: The role of infrastructure and governance in the context of adaptation. The day was rounded off with a press conference that focused on the need to place water issues at the heart of climate discussions, from one CoP to the next. Ségolène Royal, Minister of Ecology, Sustainable Development and Energy of France stated that "It is through water that we can measure both the severity and the acceleration of global warming, however we can also see that, through water, solutions can be found." This was reinforced by Charafat Afailal, Minister Delegate in Charge of Water of the Minister of Energy, Mining, Water and Environment of Morocco, who indicated that water must become one of the main priorities of the climate negotiations during CoP22. Anna Lindstedt, Climate Ambassador of Sweden emphasized the key role of water in addressing climate change, hoping that the Lima-Paris Action Agenda will become the Lima-Paris-Marrakech Action Agenda. In 2016 the World Water Council will continue to build on the momentum of the #ClimateisWater initiative, with a particular emphasis on strengthening the position of water in COP22 in Marrakech notably through the organization of a preparatory meeting with the Governments of France and Morocco mid-year.

Brazilian Professor of Civil and Environ

The Food and Agriculture Organization of