Growing governmental mobilization for “Water for Our Future” 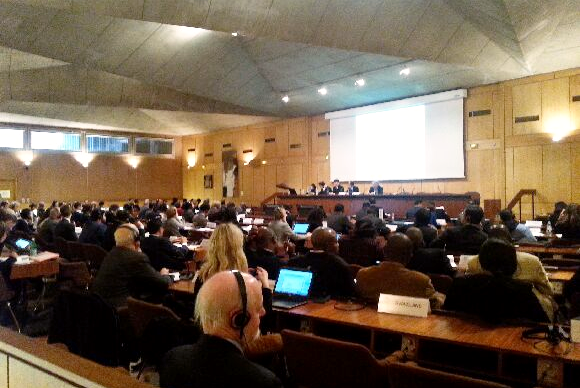 Paris, UNESCO Headquarters, 24-25 February 2015 - Over 200 government representatives are meeting again for the Second Ministerial Preparatory Committee meeting (PrepCom II) along with international organizations and civil society representatives. In preparation for the 7th World Water Forum, PrepCom II will define the political priorities and progress towards “Water for our Future” and set the foundations for the 7th World Water Forum’s Ministerial Statement.
This process led by the Republic of Korea, the host country of the 7th World Water Forum, and the World Water Council is considered to be one of the most important political efforts dedicated to water. Based on contributions received from each of the Forum’s 16 themes and the discussion paper compiled during PrepCom I, the draft Ministerial Statement will continue to be discussed at the second PrepCom meeting hosted at UNESCO Headquarters, in preparation for the Forum.
“Water is going to be one of the most important –if not the most important– issue of the 21st century. Humanity has a huge task ahead. The Forum is an amazing and the perfect agora offering the opportunity to discuss political issues related to water. We have identified the problems, we have now the solutions, the question is how we implement it and that would be the outcome of Daegu. It’s not about money, it’s about politics”, says Andras Szöllösi-Nagy, Co-chair of the Political Process Commission, World Water Council.
Seong-ho Lee, Co-chair of the Political Process Commission, Ministry of Foreign Affairs of the Republic of Korea says: “The Ministerial Conference of the 7th World Water Forum will be a unique opportunity to forge a common political message of governments focusing on the inclusion of water-related goal and ensuring its implementation in the Post-2015 Development Agenda.”
The final outcome of this common work will take the shape of a Ministerial Declaration which will be presented during the Ministerial Conference of the 7th World Water Forum on 13 April 2015 in the city of Gyeongju, Republic of Korea. The Ministerial Conference will also include a series of high-level roundtable sessions on a number of important issues.
More about the political process of the 7th World Water Forum
Read World Water Council President Benedito Braga’s welcoming remarks
Tags
FORUM
FORUM

Towards the establishment of local publi