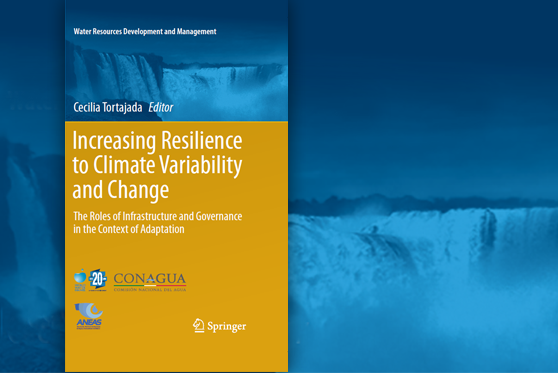 A deeply uncertain world calls for new approaches, advocates World Water Council, calling on governments to include water in global climate agenda.
Marseille, France / Mexico City, Mexico, 4 October 2016 – The World Water Council, in cooperation with the Mexican Government, launch a new book, published by Springer, entitled “Increasing resilience to climate variability and change: The role of infrastructure and governance in the context of adaptation.” The publication presents results from 11 case studies from around the world included in the Council’s program, which was initiated at the end of 2014.
Findings from the studies allow the formulation of recommendations that can help governments and competent authorities shape future approaches for water storage and management, in particular through investments, planning, policy and governance frameworks that consider long-term perspectives, multi-sector and multi-level actor needs and perspectives.
“While humanity experiences increasing demographic and socioeconomic stresses, recent episodes of extreme climate around the world bring additional complexities in finding solutions to reduce these stresses. Water is one of the most impacted resources, but water also provides solutions to these challenges. It is key in mitigating and adapting to uncertainty, both now and in the future,” highlights Benedito Braga, President of the World Water Council and Secretary of State for Sanitation and Water Resources for the State of Sao Paulo, Brazil.
“It is a testimony of the ongoing global efforts to reduce the vulnerability of the population and infrastructure faced with an increasingly evident and extreme climate change,” says LL.M. Roberto Ramírez de la Parra, Director General of the National Water Commission of Mexico (CONAGUA), about the work.
“A word of caution is that fundamental infrastructure that is built to store and regulate water under normal years may not be as efficient under climate change conditions, where extreme events are expected to increase,” warns Dogan Altinbilek, Chair of the Steering Committee for the program and Vice-President of the World Water Council. Indeed, to be effective, water infrastructure needs to be part of a governance framework that considers multisector needs and multilevel actors in the longer term, addressing political, economic, social, environmental, as well as cultural questions.
The publication can be obtained either in digital format or in a hardcover version here.
More about the Mexican partners, CONAGUA and ANEAS
Long-time partners and committed members of the World Water Council, the Government of Mexico and its institutions have been engaged in various programs of the Council, including the joint organization of the 4th World Water Forum in 2006 in Mexico City. More recently, the 52nd Meeting of the World Water Council’s Board of Governors was hosted by President Enrique Peña Nieto in Mexico City in 2014. During the meeting, President Peña Nieto, who now co-chairs the Heads of State Panel on Water announced by the UN Secretary General and the President of the World Bank earlier this year, stressed the importance of water for development: “Sustainable water management is a priority transcending borders and is a challenge that requires the combined efforts and commitment of the international community."
More about the National Water Commission of Mexico (CONAGUA)
More about the National Association of Water and Sanitation Utilities of Mexico (ANEAS)
More about the book
This book highlights the role that both infrastructure and governance play in the context of resilience and adaptation to climate variability and change. Eleven case studies analyse in-depth impacts of extreme events in projects, basins and regions in the Americas (Unites States and Mexico), Australia, Brazil, China, Egypt, France, Nepal, Mexico, Pakistan, Turkey and South Africa. They discuss the importance of infrastructure (mainly reservoirs) in adaptation strategies, how planning and management aspects should improve in response to changing climatic, economic, social and environmental situations and what the management, institutional and financial challenges would be for their implementation. Governance aspects (policies, institutions and decision making) and technical and knowledge limitations are a substantial part of the analyses.
The case studies argue that infrastructure is essential to build resilience contributing to adaptation to climate variability and change. However, for it to be effective, it needs to be planned and managed within a governance framework that considers long-term perspectives and multi-sector and multi-level actor needs and perspectives.
CONTRIBUTORS
Editor, Dr. Cecilia Tortajada, Institute of Water Policy, National University of Singapore
WORLD WATER COUNCIL STEERING COMMITTEE
Chair: Dogan Altinbilek, Vice President of the World Water Council
Members:
Tags
WWC
WWC

At today’s High-Level Panel on Water in