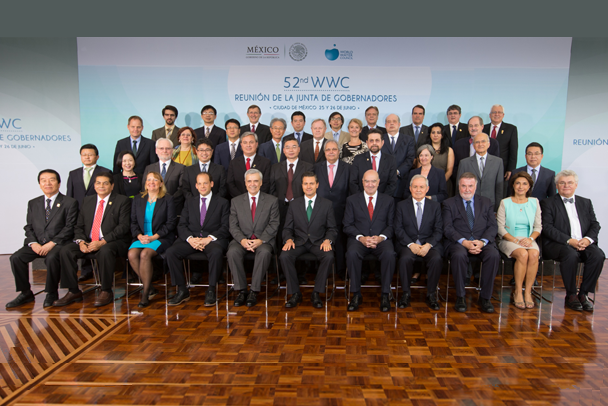 26 June 2014, Mexico City, Mexico -  “Water has always been a priority in the agenda of the Mexican Government as an engine for economic development and to protect vital ecosystems,”  said World Water Council President, Benedito Braga, during the 52nd Board of Governors meeting, closed by the President of Mexico, H.E. Enrique Peña Nieto in his Presidential residence of Los Pinos. He continued by congratulating the Mexican Government on their outstanding leadership on water issues, especially through their promotion of adaptive water management practices, and their continued contribution to the World Water Council since the 4th World Water Forum in 2006. During the meeting, President Peña Nieto, stressed the importance of water for development. “Sustainable water management is a priority transcending borders and is a challenge that requires the combined efforts and commitment of the international community," said Peña Nieto.
Dr. David Korenfeld, recently elected Chairman of the Intergovernmental Council of the International Hydrological Programme of UNESCO and General Director of the National Water Agency of Mexico, CONAGUA, asked to redouble efforts for the recognition of the importance of water in climate change within the Conference of the Parties and also called for a dedicated goal for water in the post-2015 Sustainable Development Agenda.
The 52nd Board of Governors took place during the 2nd edition of the Latin American Water Week from 23-27 June 2014, co-organized by CONAGUA and ANEAS, which offered a platform to Latin American countries to build consensus on pressing issues facing the region to prepare their contribution towards the 7th World Water Forum next year in South Korea.  Watch the video (in Spanish)
More about CONAGUA
More about ANEAS
More about the 2nd Edition of Latin America Water Week
Tags
WWC
WWC