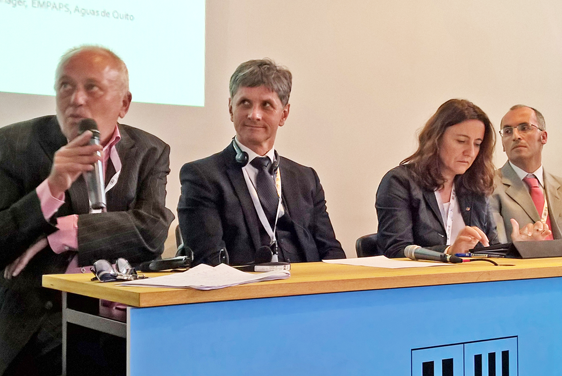 This year, the World Water Council and other international organizations have been striving to make water a bigger focus of the conversation around cities. Notably, during last week’s UN Conference on Housing and Sustainable Urban Development (Habitat III), the “New Urban Agenda” was adopted in the presence of a record number of attendees. This outcome document, in which water is mentioned 28 times, will provide the transformative framework for the next twenty years of sustainable urban development. It will be set into motion through the Quito Implementation Plan, where specific voluntary commitments will contribute to its achievement.
The World Water Council attended a number of events during the week. In particular, Mr. Bert Diphoorn represented the World Water Council during an event on Tuesday, 18 October, entitled “Beyond Basic Services” convened by GWOPA at UN-Habitat and the Institute for the Advanced Study of Sustainability at United Nations University. During the event, he maintained that improving water services in cities involves much more than technical competencies, but is also dependent on increasing political will for water issues among competing priorities with mayors and local authorities.
In the coming years, the World Water Council will continue to work on the issue of water in cities as one of its key strategic initiatives for the current mandate, in addition to supporting the Local and Regional Authorities Process in the lead up to the 8th World Water Forum.
Tags
WWC
WWC