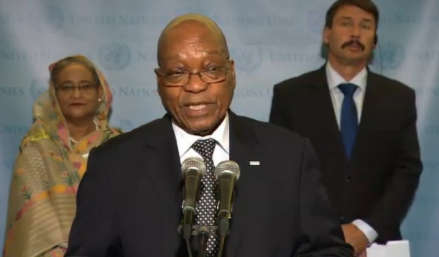 Last week, the High Level Panel on Water, consisting of 11 sitting Heads of State and Government and one Special Adviser, issued a Call to Action for a fundamental shift in the way the world looks at water.
The World Water Council, who was instrumental in the creation of the Panel, will continue working closely on some of its key initiatives. The Panel is set to meet again later this year at the  Budapest Water Summit, which will be organized by the Government of Hungary, in cooperation with the World Water Council. In the Joint Statement, the Panel, which is jointly convened by UN Secretary-General Ban Ki-moon and World Bank Group President Jim Yong Kim, recognized both the human right to safe drinking water and sanitation, and the need for all to take responsibility for managing water better. The need for a comprehensive and coordinated approach to water, as well as increased attention and investment in water-related services, are at the heart of the Call.
Four initiatives for immediate action by leaders worldwide were announced in the Call:
The High Level Panel on Water aims to mobilize effective action and advocate on financing and implementation to increase access to safe drinking water and adequate sanitation for all, and to improve the sustainable management of water and sanitation (Sustainable Development Goal (SDG 6)), as well as to contribute to the achievement of the other SDGs that rely on the development and management of water resources.
The Panel presented the Action Plan which outlines new initiatives and investments that can put the world on the path to meet the SDG6 and related targets. The Panel Members committed to lead the way and encouraged other Heads of State and Government to do the same.
Currently, more than two billion people are affected by water stress, a figure that is expected to rise in coming decades due to growing demands on water supplies and the increasing effects of climate change.
While 6.6 billion or 91 percent of the world’s people used an improved drinking water source in 2015—up from 82 percent in 2000—an estimated 663 million people were still using unimproved sources or surface water. Moreover, not all improved sources are safe. For instance, in 2012 an estimated 1.8 billion people were exposed to drinking water sources contaminated with fecal matter. As of 2015, 2.4 billion people lack access to improved sanitation—with 946 million people still practicing open defecation.
Read the HLP on Water’s Action Plan
Watch HLP members present the Call for Action at the 71st UNGA
Tags
WWC
WWC

The idea of forming a ‘world water counc