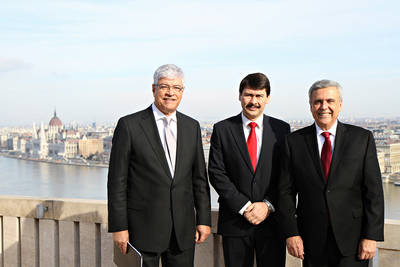 President Braga also met with the Brazilian Ambassador, H.E. Sergio Moreira Lima. Here with President Áder in the middle and Ambassador Lima to the far left.

The Budapest Water Summit will take place on 8-11 October 2013 and aims to formulate concrete recommendations for the UN General Assembly for setting the post-2015 Sustainable Development Goals.  Scheduled to attend are high profile political and diplomatic representatives, including the Secretary-General, Ban Ki-moon, and some of the most prominent water experts in the world. More information on